Pi is not a traditional science fiction film. It’s about science and it is fiction but there are no aliens, space travel, or even robots. It is a fictional story that happens to be science based. Well, it is math based. The film follows Maximillian as he uses math to find the meaning of life. The film is also in black and white. I apologize for the lack of color but this is not my film. I was curious to watch it because it is Aronofsky’s first feature. This director goes on to make Requiem for a Dream two years after this. He made The Wrestler and Black Swan. The funny thing is that I have seen most of the films in his oeuvre; only The Fountain and Noah remain. So it is interesting to watch some of the themes that Aronofsky deals with several successful films in his first one.

Pi is an odd film. There is a lot going on and while short, the idea of finding God through Math is treated very heavily. I have a feeling that this review is going to be short because I don’t know how I felt about it. I was reminded of myself in 10th grade when I read Metamorphosis. While the story on paper seems like something I would enjoy, I remember being left with the IM equivalent of this face: :/.

Perhaps it is because Maximillian is not easy to connect with. He is a genius that seems to be tortured and angsty and finding God in math. It is so interesting on paper. Yet the movie seems to be chaotic and a little hard to follow at times. This is probably because this is his first film. First films are odd ducks, you can see the talent but when you make a film, you are kind of flying by the seat of your pants, no matter how ready you think you are. I mean the most interesting thing I found about the film was the game of trying to figure out what NYC subway train he was riding. It’s the F, by the way.

I was also distracted by the old tech in the film. I’m talking floppy disks as big as my hand. I love seeing old technology in movies; it is a better time capsule than clothing. I guess if we are determined to never update our clothes, we must show how old something is by how big the computers are and how much a Floppy can hold

I think the main issue I have with it is that the subject matter is treated with more gravitas than necessary. I had the same issue with Metamorphosis, that the story is treated as being super important and all knowing, despite the fact that it is very simple. This film is the story of a man who tries to find God in math and possibly goes insane or finds him and cannot handle what he knows. Yet, the film has so much self-importance that it is tortuous to watch at times. 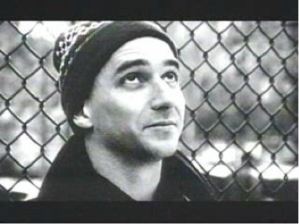 I don’t know if I would recommend this movie. While short, it is slow and feels long. It is also not everyone’s cup of tea and even some of the biggest science fiction fans may be turned off to it.

UP NEXT: May is for musicals and I shall be watching Into the Woods.