This week, with Black History Month wrapping up and Women’s History Month waiting in the wings, I thought we would look at Ava DuVernay’s 2010 film I Will Follow. (I apparently told myself and everyone else that I would be doing Middle of Nowhere and I misspoke, sorry guys, but if someone can find me a copy of it, that would be awesome). This film was written and directed by Ava DuVernay, a black writer and director that is having the success that we normally see for white men, she is in talks for many films and is also directing highly anticipated episodes of television. Now if you don’t know about DuVernay, she won the Best Director award at the 2012 Sundance Awards for her second film Middle of Nowhere. She is currently working on a film about Martin Luther King, Jr.’s life entitled Selma and she heads AFFRM, a film distributor tat specializes in movies made by black directors. (Is it obvious that I really admire her yet?) But enough about my gushing about DuVernay, let’s talk about the film.

I Will Follow shows Maye (Salli Richardson-Whitfield) in the aftermath of her beloved aunt’s death. It shows a single day in her life and the 12 people who help her move forward. DuVernay and all of the actors do a fantastic job of showing how grief can transform a person. How the death of a person can transform you and even the effect of family. I find family dynamics fascinating. It’s a trope that I notice shows up in all of my writing because family is so defining of us. They are a group of people that we are with that have so much history and their own rituals and customs. Next time you are with a large group of your family, watch the mannerisms and the ways of speaking. I did this last Christmas; I apparently move my hands like my mom, laugh like my aunt, and speak in the same cadence as my Nana. Families are weird. Our family is our tribe and even when we feel out of place, we still know the language. The running joke in my family is that “we speak [person]”. We speak their language. I am known to speak in half sentences and only someone who is a part of my family (blood or not) would know how to speak “MK”. This film does a great job of showing the dynamics of a family without giving us a boatload of exposition. 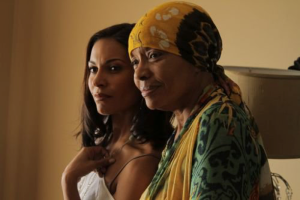 This film also does a great job of showing grief. Maye loves her Aunt Amanda but she’s not weeping all over the place. There is an air of melancholy that gets lighter and lighter as the film goes on. Maye is still obviously grieving at the end of the film but she is able to go on with her life. She is ready to enter the real world. It also shows an important step in grief, which is to share the good things. Throughout the film, there are moments where Amanda’s past is revealed and it is the way we get to know Amanda. And the film is telling us that this is the way to get through your grief. The way to keep the person alive is to share their memory with people who knew them and people who don’t. It also reminded me to share your love with your people while you have them. (I’m going to be like the president and say call your family.)

I Will Follow is well written and acted; the best thing about it is that it was grounded in realism. There was no last ditch delectations of love, no unrealistic family make-up sessions. Maye is grieving for her aunt and her life is moving on. It is what it is and that is always nice to see.

Now I know that this review is short, but as I write this, I have about 24 hours until Scandal comes back on my TV and I need to get as much done as possible. Also if you are not watching Scandal, what are you doing with yourself?

UP NEXT: In honor of Woman History Month, we will be looking at films directed by women. Up first, the much talked about Blackfish by Gabriela Cowperthwaite.