This was originally written in March 2014. 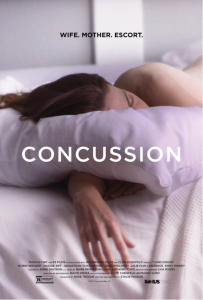 Concussion tells the story of Abby, played amazingly by Robin Weigert, who becomes an escort after suffering a concussion and starts to hate her Jersey suburban life. It is the debut film of writer-director Stacie Passon and is a 90-minute feature that is low key and does a fantastic job raising a bunch of questions about happiness. Because that is what is at the meat of Abby’s angst, she’s not happy. She lives a pretty boring life. She is a housewife who goes to spinning, picks up her two kids from school, and cooks dinner before her divorce-lawyer wife comes home. I was surprised when watching it that her life was extremely hetero-normative. When she has dinner parties with other couples, all straight. It’s a dull life to me and Abby is miserable. She oozes it and in the first scenes, you honestly don’t want to even be near her, because she yelled at her kids and doesn’t feel guilt.

But as this story unfolds, Abby becomes an escort and starts to like it – A LOT. She has found her happiness in the way of sleeping with other women and getting paid for it. She becomes happier at home and more in tune with herself. She almost adopts this Don Draper persona where she is not herself at home or with her clients, she is who she should be.

But like most of us know, this can’t last forever. And it doesn’t. Clients start to leave, her connection to the women starts to question where she should stop, and Abby sleeps with a woman that is in the same Mom circle she runs in. Towards the end of the film, it gets a bit less subtle with the themes but it works. A client talks to Abby about a Gandhi quote that she found interesting, “Actions express Priorities”. This is juxtaposed with Abby’s wife Kate having to pick up the kids from school after Abby forgets. Abby’s priorities are shifting and she is being left behind in this state where she is not truly happy. Her wife even asks her at one point to just like something.

Because that is the real crux of Abby’s issue. She’s unhappy because she really doesn’t have anything for herself. Every thing she does is for someone else and when she starts this endeavor, it’s a selfish act that could damage her family. It’s an act that is not rooted in happiness. It’s done in anger, from what I have yet to understand. Yet this issue that is eventually solved by Abby and her wife Kate showing up 100% in their marriage and life, she seems happier, genuinely happier.

The film ends on this note, a somewhat bittersweet thing where Abby is back to her mom life but is changed. This liaison in escort services was almost like her concussion, a moment where everything was fuzzy and almost unreal.

I admit that the topic of adultery is tough to swallow and the film doesn’t have any real consequences for Abby, which made me a bit angry. The film also doesn’t go too far into Abby’s quest to find happiness, which is a shame, because the happiness that Abby thinks she should have doesn’t really exist. We, as a society, place too much importance on what we have and how perfect our life seems in order to be happy. Happy is an emotion, not a state of being. Abby was really looking to be content. She wanted to not feel the pressure to be a perfect wife and mother, and not feel that she was missing something. Maybe she got that or maybe she didn’t.

OTHER NETFLIX OPTIONS: If you don’t want to watch a woman stumble through her discontent with life, here are 2 documentary options because women are directing a ton of docs now.

1. You can learn how Breast Cancer research and the Pink Ribbon we all know are being manipulated by the all mighty dollar in Pink Ribbon, Inc. directed by Léa Pool. 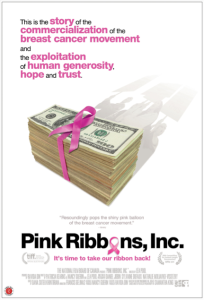 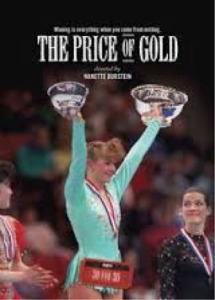 UP NEXT: But I’m A Cheerleader directed by Jamie Babbit